Ghosts are harmless. There is nothing to fear. If an entity is perceived, simply view it as

evidence of an afterlife, that the dead are alive.

Contact may occur in various ways. Most commonly, if the procedure is successful, the

ghost will appear in a dream of someone who sleeps in the house tonight.

Sometimes, however, direct contact during the actual séance is possible. The spirit may be

perceived through any sense. A scent (the sense of smell is the most emotive of our senses)

touch (a cold spot may be perceived, most commonly from the left side). The third most

common manifestation is through the sense of hearing (a sound or a voice). The rarest

contact is visual. We will see a light or an apparition.

Of course, a spirit may be present and be unknown to us. There are signs, however. When

a candle flame burns blue, a spirit is present. Also, if a hound appears agitated, a ghost is

To contact a spirit, certain conditions are helpful. Spirits are most visible at night. In

occult lore, the moon is older than earth and is dead. The moon is a giant luminescent

corpse in the sky, and it exerts a powerful influence of death on the earth.

(but metal-especially iron and steel-repels them). The presence of spiritually sensitive

people-especially women and children-also helps open the portal to the other world.

The technique we will use is from ancient Greece, with some later Christian additions.

Four people-or six or more-will sit around a wooden table. We may not use five people, for

Christ was murdered with five wounds, and five-symbolized by the pentagon and the

pentacle (the five-pointed star)--draws sinister forces. (The victims of Jack the Ripper-in

19th century London-were positioned to form a huge pentagon in the city.)

The hands of the four must be placed flat on the table, with the little fingers of each hand

touching the hands of the people on either side.

In the center of the table we will place a clear glass bowl filled with olive oil. A single drop

of fresh blood-drawn from the finger of a volunteer--will be placed in the oil. During the

séance, focus on the bowl of oil and blood. (Michel de Nostredame, the famous seer who

was also called Nostradamus, used a bowl of blood and sometimes a bowl of water. The last

was later replaced by an eighteenth century invention, the crystal ball.)

Two candles will be positioned on the north and south sides of the bowl. A bible opened to

1 Samuel, chapter 28 (the text details a communication with a spirit) will be positioned on

the west side. (The west-the point of the setting sun and rising moon-symbolizes the land of

the dead. By positioning a bible there we will draw good spirits). A single piece of quartz

will rest on the open book. On the east side of the bowl, we will place a lily. (The lily is a

Outside the circle, we will position a bell (this drives away spirits), a steel knife (steel,

especially with an edge, repels spirits), and some rock salt. (Salt thrown into a fire drives

away spirits, including demons). These things will be used to defend ourselves from any

During the séance, do not speak. Only the designated medium, who will lead our procedure, will speak.

Remain serious and respectful. Do not laugh. According to legend, the dead cannot laugh with joy and

therefore levity offends them. Do not break the circle by moving your hands. Focus your

attention on the bowl of oil and blood.

Remember, the spirit may be perceived through any sense. Be aware of scents, feelings,

bell, the steel, and the salt in the fire.

When the medium is finished, she will thank the spirit. She will then close the bible and

Tomorrow-in the light of day-a bell will be rung throughout the house. That will clear the

area of all entities. 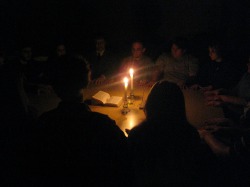